Angry Birds Fanon Wiki
Register
Don't have an account?
Sign In
Advertisement
in: Other things by Redbird07, Movies, Everything by Redbird07

IMPORTANT! PLEASE READ ALL ITALIC TEXT UP HERE! - The author of this article, Redbird07, forbids ANY way of editing this page.

If an administrator or bueaucrat (other than Redbird07) edits this page, he/she will have administrator powers 'removed and be blocked for 2 weeks.

Super Pig is a Movie by Redbird07, published by Twentieth Slingshot. It is about King Pig in space.

Welcome to Updates! Find out stuff of Super Pig here!

Super Pig Heikki, the fake sequel has been sold, but the REAL sequel is now coming! Redbird07 Films has announced the new DVD cover. What could it be about? The original rating is U, but this time, PG appears! It must be a much more epic adventure of King Pig!

The sequel's DVD cover. Why are the Bird Eyes there? And what's with the red text?

The rumoured cover. But Super Pig 2 will be too epic for a U rating.

The two mean answers are choices, too. But I don't expect that many people will choose it.

Super Pig has won Bird's Race, and turned out to be faster than Heikki himself! But when he goes back to Earth and crash-lands in the United Kingdom, King Pig's adventures turn into Olympic Adventures! Can Super Pig help test the Olympic games, and return home safely?

Another PG! But no matter how bad it gets (It never gets worse than PG), it is ALWAYS your FAVOURITE Pig!

Did you like Part 1? Some of this will be made into a Part 2, but a Director always needs to make his film right!

This will be added with the other films soon. 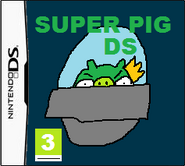 The cover they had made.

Redbird07 Films are now confused, and Matrix and Speeder, the 2 workers, are not the only ones that did something wrong. Redbird07 Films Boss, Noise thought it was a future time, and that they already launched Super Pig 3D. So, his confused workers pressed buttons and more, and launched a DS Cover of Super Pig. Noise has just managed to calm down now, and knows the time. But now his problems are the coming soon Super Pig DS. What will Noise say about the accident? Just wait and see...

Noise, Redbird07 Films boss and bird who created this accident, has replied to the mistake and said:

"We always thought of Super Pig becoming a video game for those who can't use the DVD. But revealing the cover is enough to make birds exited. So, I have decided something that will become something and something or other...anyway, Super Pig can't come to the 3DS or the Wii, or Wii U. Reasons? 3DS, because it's hard when you can only create 2D films/games. Wii, because we need to make it good for any TV. We can't have it stretching everywhere and it looks weird. And Wii U, because we need to make an HD film first! Just to learn about making HD films/games. That's because Wii U makes things HD. It WILL come to DSi. And we will tell you later"

Later...the gameplay and cover were revealed.

The game is called "Super Pig DS Photos" and you can now take a photo of something, and put it in the game!

See below for putting yourself in. You can take a picture of something, and it will appear in your Photo Collection. You can get photos from there, and choose parts from the game to add the item to. But before adding the photo, it asks you what you want to add, then it removes it from the photo and adds it.

Pigs and birds can add themselves! Just choose to take a picture of yourself, choose if you are a bird or pig, then take the picture. If you chose bird and you are a pig, it creates a Pig Bird. Same with opposite, but creates Bird Pig. 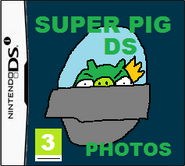 The game is coming soon, like the DS version. So not much is known.

Now that the Olympics have ended, Redbird07 decides to make plans for Super Pig Olympics get bigger. He is even begining the thought of an in-DVD game similar to Super Pig (original). But the only other plans revealed are plans for ANOTHER fun game! No one knows what kind of game, what it looks like, what's in it, or how it works.

Speaking of Olympics, a new Redbird07 game is coming!

A new film of Super Pig + a TV series starts.

This new film has only been revealed as Super Pig 3. It is known to be the first Super Pig film with Space Eagles.

But that's not everything! A new TV series called "Super Pig Shorts" was releaced. To celebrate the begining, here it is.

It's short, but it might get longer as birds and pigs start to enjoy it. Use the poll to show how good it was. It most birds and pigs like it, the next short will be longer.

Super Pig coming to Wii U

Out of the 3 things it wouldn't come on, the first to finally have it out of those is Wii U. The strange thing is...they are putting the game on Nintendo things. Anyway, there is no picture because they have not made the cover. And...that's it.

This is also the description on the back of the DVD.

King Pig may have all the Eggsteroids, and completed his adventure, but he still has some adventures. When the Birds remembers the Birds' friend, Heikki, and that he was a racer, King Pig's celebrating will not continue! Can the King Pig and his Pig friends defeat the Birds in the biggest Space Race you will see?

After crash-landing in the United Kingdom, King Pig has 5 adventures set for him. The Super Pig adventure for the 2012 Olympics could be King Pig's best adventure! Can the King Pig do his jobs, and get home before he gets eaten?

This DVD Can Be Updated

Something saying you can update this DVD.

It shows trailers for other films/TV series created by 20th Slingshot (Note: The Angry Birds Ninja TV trailer seen here is the 2nd trailer, not the 1st)

The picture above the choices, is a picture of King Pig in his Space Ship. The choices are Play, Parts, Set Up and Eggstras (Extras).

Shows you the different parts.

This gives you choices of Languages, Audio Description, Subtitles and Updates.

The Eggstras section has Deleted Scenes, Character Scenes, Videos, a Game about the movie and Previous Updates.

This DVD Can Be Updated

The Main Menu is completely dark red, with King Pig on it. There is Play, Parts, Set Up and Previous Updates.

This part cannot be seen.

(If it seems King Pig is talking normal, the person as his voice was not intrested in saying silly things, but he can still act like King Pig is silly) (If you want to add a part, ask for it in the comments)

This film is drastically different than the original and the parts are much more short.

The fail of Fat Pig

Faster than speed itself

The same thing; does it ever end?

SUPER PIG
A FILM BY REDBIRD07
(IN ORDER OF APPEARANCE) STARRING:

PRODUCED BY
REDBIRD07 FILMS AND

THIS WORK IS COPYRIGHTED UNDER THE UNITED STATES COPYRIGHTING LAW.

ANY UNAUTHORIZED REPRODUCTIONS OR COPIES WILL RESULT IN FEDERAL LAW CONSEQUENCES.
SUPER PIG IS A REGISTERED TRADEMARK OF REDBIRD07 FILMS.

Coming when I can sort it out!

The start of Part 1, showing this is Redbird07's Film

The Pig comes out.

The Pig has his flag.

He leaves the flag behind, and gets back into the Space Ship.

The Space Ship flies away.

King Pig was watching the film.

He is shouting at Chef Pig (His eyes moved, and he looks more angry than last time)

The DVD Cover for the Utopia Update. (Releasing January 3rd)

A new Heikki Special is coming! (Note: It is a separate DVD. But it is not the sequel)

There is a 2 Disc Special Edition coming the month after Heikki.

Eggsteroids (Reason: It was already introduced)

King Pig as seen on all DVD Covers

The DVD lets you update it. You can go to any shop and get it updated, so they give you a DVD that looks different (It acts like the old one) Then they give you a new DVD box. When playing your DVD, go to Set Up, then Update, and new stuff will be added to your DVD if you have internet connection/Wi-Fi. If there are no updates, it will tell you.