The show takes place on a small island called All Terra. The main events of the show take place near Holly and Callahan's houses located in a small forest. The surrounding area is covered in Pig Cities and rolling hills. During the events of the series, many buildings are being constructed.

The series mainly focuses on two main characters, Holly and Callahan, but the series often diverts the focus to other characters.

Callahan is an energetic joke loving person with almost no worry. Callahan has been shown to care for his friends, and risks his life to save them.

Holly is a shy timid person who really only fights if necessary, and prefers to talk things out. She tries to be kind, but sometimes she overdoes it. 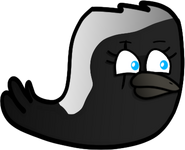 Holly's render in this show

Callahan's render in this show

The show seen on the Holly Evolution Photo

The show's name seen on the Callahan Evolution Photo
Add a photo to this gallery
Retrieved from "https://angrybirdsfanon.fandom.com/wiki/The_Adventures_of_Holly_and_Callahan?oldid=168199"
Community content is available under CC-BY-SA unless otherwise noted.