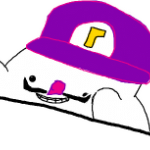 aka Creeper the Undrawn Sheep

I'm revamping my userpage because why not

Opinions on other users. I'm only putting people who I've socialized with or seen active during my time on this wiki here.

Everybody else I didn't put on here

Facts about me that disappoint me

At the very top of this page, you will find my avatar with a box next to it including my username, edits, bio, and alias. However, the "I am" section, actually supposed to before gender, is marked as "a panda eating cake." That description has been there for quite a while, longer than all the other info in the box. Why though? It's not a gender, and nothing about it has anything to do with me. After all, I'm a sheep, and I don't really like cake. Well, back in the first grade (Year 1 for some others), I was sitting at a table behind some other people. They were talking about drawing stuff, and one of them said "draw a panda eating cake!" The person drew a cake eating a panda. The requester said "panda eating cake, not cake eating panda!" The artist said "Oohhhhh....I thought you meant panda-eating cake. Like, a cake that eats pandas." That really stuck with me. It was the first thing I'd ever heard that portrays not only 2 meanings, but 2 opposite meanings. When I created my fandom account, one of the first times I edited by userbox, I put that in. It's just what I am I guess even though that would be one of the last things you think of when you think of me.

Retrieved from "https://angrybirdsfanon.fandom.com/wiki/User:FANDOM_Creeper?oldid=184823"
Community content is available under CC-BY-SA unless otherwise noted.