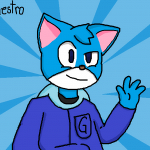 hallo me a alternate account of Gestro.... ok bye

and the other account that was used for a short amount of time because of the bad gateway incident... GestroG

Hello users of the Angry Birds wiki, its me Gestro!

and.... follow this wiki's rules or admins obliterate you using fire blasters and stuff...

thats it... why are you still here?

Things I have opinions on..

These are things that i like/hate..

Minecraft - because you can build and play survival..

Kaitou Joker (Anime) - i found this anime on Disney and.. yeah.. i got interested..

Spammers & Vandals - You would know..

My thoughts on Users..

this is what i think about users..

ComboLuigi2000 - He's an awesome guy, we both have some interests, and basically, he's just cool..

Omega138 - We share some interests and is cool, but just used to SHOVE alot of anime..

Icebird2019 - Cool, and great.. but just a bit immature, and for some reason has hatred against Omega..

Yoshi1219 - A good admin who protects the wiki!

Anyone i did not put in here..

IM A VANDAL! - i never encountered him until i saw a post on Combo's Wall.. and.. yeah i never saw him since then..

Angry101 - I did not exactly hate him back then... he's immature, and a brat, but when i left, i began hearing stories about him.. Angry swearing, vandalizing (even though he already did that) and everything bad! i heard he's banned from this wiki and Combo's wiki for being a menace.. now im on the look out..

NEED TO BE DESTROYED!

That one person who Yoshi does not want us to talk about.. - Yes... you know who im talking about...
Retrieved from "https://angrybirdsfanon.fandom.com/wiki/User:GestroPlays?oldid=186997"
Community content is available under CC-BY-SA unless otherwise noted.